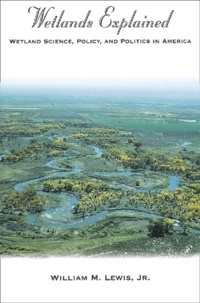 The United States lost about 100 million acres of wetland area between the colonial era and the 1970s. In the 1970s, however, elimination of wetlands, which had been long accepted as either beneficial or necessary, began to meet strong opposition as the values of wetlands became increasingly obvious. Reduction of waterfowl populations was one of the first widely recognized consequences of wetland loss, but wetland scientists also showed that wetlands moderate the rate of flow of water in streams and rivers, cleanse water through the removal of nutrients, organic matter and sediments, and support classes of organisms that are economically or aesthetically valuable and cannot grow elsewhere. Increasing public realization of the vulnerability of wetlands led to federal protection of wetlands under the Clean Water Act and similar kinds of protection at other levels of government. Protection of wetlands has been opposed legally and politically, however, with an energy and persistence seldom paralleled in environmental regulation. Wetlands Explained shows how the controversy over protection of wetlands has emerged and evolved. It explains the nature of wetlands in familiar terms and details the attempts of federal agencies to translate the unifying characteristics of wetlands into definitions and protocols capable of withstanding legal and technical challenges. It examines the successes and failures of the regulatory system and the means by which this regulatory system has assimilated increasingly sophisticated scientific knowledge to support the public will on matters of environmental protection. Wetlands Explained considers not only wetland science, but also the political, legal, institutional, and cultural aspects of America's complex relationship with its wetlands.