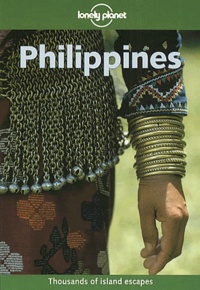 The Philippines' extraordinary diversity and beauty in one comprehensive guidebook : kaleidoscopic local festivals, bustling cities, deserted islands, awe-inspiring rice terraces, erupting volcanoes, and great adventures under sea and in the hills. Over 100 easy-to-read maps. Completely revised by a new team of authors. Culturally sensitive and insightful information on the country's political, economic and environmental scene. Essential language chapter, with handy phrases in Pilipino.

The Philippines was named in honor of King Philip II of Spain.Spanish explorer Ruy López de Villalobos, during his expedition in 1542, named the islands of Leyte and Samar Felipinas after the then-Prince of Asturias.Eventually the name Las Islas Filipinas would be used to cover all the islands of the archipelago. Before that became commonplace, other names such as Islas del Poniente (Islands ...