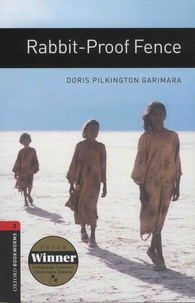 Fourteen-year-old Molly and her cousins Daisy and Gracie were mixed-race Aborigines. In 1931 they were taken away from their families and sent to a camp to be trained as good 'white' Australians. They were told to forget their mothers, their language, their home. But Molly would not forget. She and her cousins escaped and walked back to Jigalong, 1600 kilometres away, following the rabbit-proof fence north across Western Australia to their desert home. Rabbit-Proof Fence is the true story of that walk, told by Molly's daughter, Doris. It is also a prize-winning film.

Rabbit-Proof Fence is a 2002 Australian drama film directed and produced by Phillip Noyce based on the book Follow the Rabbit-Proof Fence by Doris Pilkington Garimara.It is loosely based on a true story concerning the author's mother Molly, as well as two other mixed-race Aboriginal girls, Daisy Kadibil and Gracie, who escape from the Moore River Native Settlement, north of Perth, Western ...